Our first two shows of March were cancelled due to a combination of tsunami and COVID scares. Fortunately, both threats subsided quickly, and one of the shows has been rescheduled for October 2021. Unfortunately we were unable to rebook flights in time to play at the Wellington-based festival. Fortunately I have meetings with venues this weekend about a new Wellington booking in 2021. C’est la vie. En avant!

Girls On Top was the first March show to go ahead. An intimate afternoon of music on a rooftop in early fall…acoustic singer-songwriter vibes from Jan Elliott and Gin and Chronic gave impressions of mid 20th century musical nostalgia. Imagined reminiscence of Joni Mitchell, James Taylor, Carole King…for many in attendance it was their first time hearing my originals, their being accustomed to San Detroit Band covers as frequently contracted by their local. It felt good to show that community a different side of myself. A repeat performance has been booked for August.

Art Beat is a beloved annual festival in my adopted hometown of Whangarei, and a surprise gig for me! Last minute the event organizers realized that they had sanctioned a buskers tent, but failed to hire any buskers. I was asked to assist in filling the gap. Reasoning that I couldn’t do a full day of busking on my own, I gathered my instruments and a couple rugs and convinced Micky to help me host an all day jam session. People of all musical backgrounds engaged us throughout the day, and we learned a bit about the variety of musos in Whangarei. Mid day one of the MainStage performing acts dropped out, and I was asked to fill that gap as well – you got this tent, Micky? Sometimes I think I work best under the wire.

The Waipu Jazz and Blues Festival was definitely a highlight of the month. I was honestly nervous for us to close the show knowing that there were other acts that wanted to close and were capable, but Scott, Austyn, Jesse, Rebekah, and I were equal to the task. The energy we exchanged with the audience was nothing short of epic. Even on the slow and musically indulgent songs the audience gamely picked up what we were laying down. The after party was fueled by the lingering high, and lots of future plans were made over as many toasts that night.

Botticelli Restaurant and Wine Bar was as enjoyable as ever. Nothing beats Botticelli’s for artist hospitality. Frankly, it’s hard not to take them up on their bottomless wine for artists. BUT, artistry comes first, and nothing will make you think you’re performing better than you are like substances will. That might only be true for some…however, I’m too afraid to find out if I’m one. Our mate Paul, by contrast, often drives us there so I can drive him home. It’s part of his charm. He’s a Londoner, a real geezer – if you read that in the proper cockney accent, then you know what I mean ,g’uvnor! He has a way that is simultaneously shocking and endearing. How the stage dynamic between us works is a bit of mystery, but it works just the same. We played for an extra hour just because.

Titirangi Festival of Music was nearly a comical experience. This highly rated annual festival had a confluence of factors to deal with, including construction, rain, and never before cited zoning issues. As a result, the outdoor stage was downgraded to two outdoor staging areas just off the sidewalk and directly across the street from each other, resulting in a somewhat confused cacophony. Understandably, the festival reported less traction than in years past, but the die hard music lovers of Titirangi – of which there are an impressive many – still made a keen showing. In particular, I recall two young girls sitting as close as they could manage and staring with the intensity of unabashed youthful wonder. I shared a knowing smile with their father, who seemed pleased. If they fail to remember the music, the time, the place, or even my name, I hope they remember the way they felt just then.

The Club, Titirangi saw Paul and I together again within four days of our last gig, and we picked up where we left off. It’s fun to play back to back gigs knowing which songs really hit and seeing improvement in the tunes you’re still feeling out. This time Micky joined us on bodhran. Did I mention that we were on the roof again? Only a couple weeks had passed since our last rooftop gig, but you could already feel autumn progressing. People snuggled on the roof with their partners, blankets, and lazy Sunday afternoon drinks. We were joined by a couple jammers – Bevis England and Gaio Bardelle on mandolin – and no less than 3 semi-professional egg shakers/tambourine players. Maybe it’s just this particular rooftop, but I got nostalgic for a time before mine again.

April saw us return for the second show of Auckland Fringe. There was lots to coordinate. The first Auckland Fringe show occurred the night of the 7-day lockdown, which severely hampered attendance. For a show that cost over $1000 to produce, this was a real bummer. Thankfully the festival organizers helped me to schedule a repeat performance of sorts, notwithstanding the new venue and collaborator which we had two weeks to organize. The good news is, it worked! While I would have enjoyed a larger audience, the new venue and collaborator – beautiful things nz and Sally Gill, respectively – were AMAZING to work with. We had a fantastic show together as evidenced by the 10 masterpieces that were made the night of the show – now on display pending sale at beautiful things gallery – and a festival award for Best Music Performance. See Auckland Fringe Festival – Ahurei Mōwaho O Tāmaki Makaurau Announces 2021 Award Winners 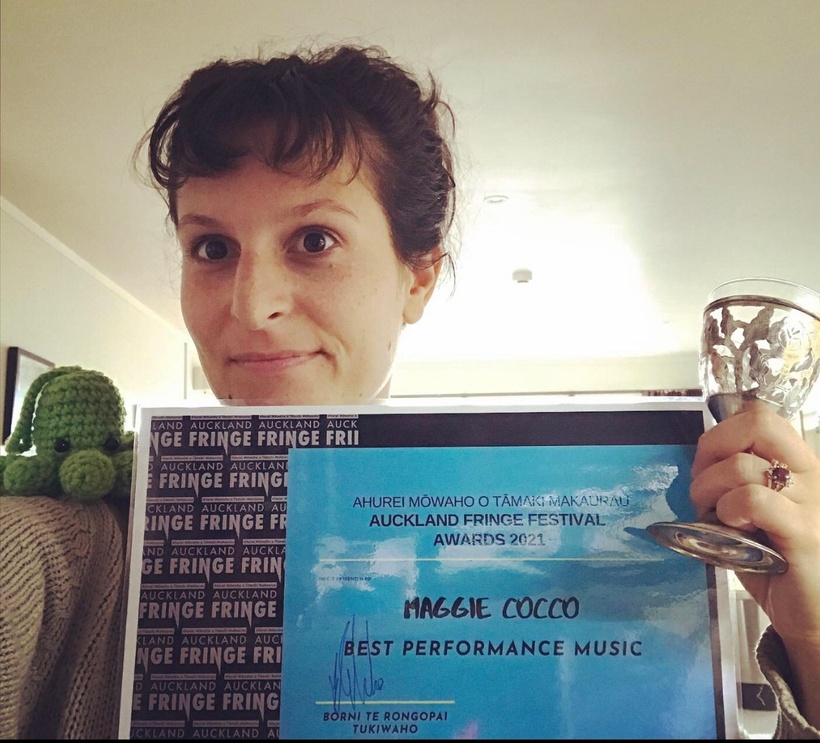 A full video of our award winning show is in post production! The resulting artworks will soon be for sale at https://beautifulthings.nz/

Music City San Francisco Lockdown Sessions: Tune wherever, whenever from May 1st to catch this interview and live set featuring The Maggie Cocco Band. Music starts at 1:15:00 https://www.twitch.tv/musiccitytv?fbclid=IwAR3FBVO4_7FZSh0eJRB0F4Df8brdNm-oT015c1aX7KUjvBu8LxZE0p1BySk

Mother’s Day in Piha: What kind of jam does your mom actually want for mother’s day?

Surprise! Reprise: In October 2020 American singer-songwriter Maggie Cocco premiered an emotional, multi-sensory, and interactive experiment at Whangarei Fringe. The novel show featuring original music and improvised collaborations with audience and local artists has been captivating audiences across New Zealand, earning an award for Best Music Performance at Auckland Fringe 2021. Now it returns to its inaugural city for a Fringe Reprise!

Maggie is now  a board member of Girls Rock. GRD is a community organization dedicated to fostering creative expression, positive self-esteem and community awareness for girls, women, gender expansive, and transgender people through music education and performance. By encouraging creativity, confidence, and collaboration in a supportive environment, we strive to empower young people to challenge preconceived notions of what they can do, what they can become, and become engaged members of our communities. We believe it is crucial that all young people have access to equipment and instruction regardless of their socio-economic background, religion, race, gender identity, sexuality or ethnicity. Please consider donating to GRD or your local chapter. https://www.girlsrockdetroit.org/

Singing 101 Workshop! I will be presenting at the Girls Rock Camp Alliance International Digital Conference. Attendance is by donation! https://www.girlsrockcampalliance.org/conference

A visual artist, a musician, and a radio DJ went to a bar and decided to form a collective with the intent to bring multimedia installations to public spaces. Stay tuned.

My personal assistant and I are plugging away at a massive overhaul of our business infrastructure. Transitioning from BMI to APRA, Tunecore to NoiseHive, and still working with Roadmap to develop our marketing plan for each brand (Maggie Cocco Band, Science for Sociopaths, San Detroit, etc). Thank you for your support through this process!

I am now on TikTok! Follow @MaggieCoccoMusic for mini music offerings from vocalizes to verses, and @MaggieCocco for things I find amusing.

I’ve been really into cooking since lockdown. I’ve never had my own kitchen before, so I only started learning since moving to New Zealand. The foods available here are pretty similar to back home, except that non-seasonal foods have a hell of a long way to get here and are therefore unaffordable. So I’ve been getting used to seasonal cooking. Since I live near farm country, when something is in season we are practically swimming in it. My method is as follows: I look at what we have in the pantry, note what needs using soonest, and google recipes that use as many of those ingredients as possible. It usually turns out well, I rarely make the same thing twice, I’ve developed a lot of different skills (sometimes by virtue of not looking carefully enough at the recipe to know what I’m getting into), and it’s SO satisfying to make use of things you already have before they go to waste.

A few of you reached out to see how I fared with the Tsunami. Fear not, I was shaken but not…stirred? In any case, all is well 🙂 I’ve written a blog sharing my experience which I have added to the Patreon page simultaneous to this posting.