LIKE A MOTH: An Exhibit by Maggie Cocco’s Science for Sociopaths

“In a response to the digital age, where a proliferation of information collides with a scarcity of attention we are here to highlight the importance and transformative power of being present, and connecting with art and each other through a shared experience.”

The Yvonne Rust Gallery is shaped like a rhombus with angles so extreme it’s better to think of it as a blunted triangle. The entrance to the gallery is at the hypotenuse side furthest from the most acute (and blunted) angle. From there the exhibit reads like a book, left to right. The pieces incidentally read in chronological order, starting with a spattering of lyrics, nerdy music babble (not pictured), and a welcome that reads:

Welcome to LIKE A MOTH. All the pieces contained herein were inspired by and created at Maggie Cocco’s Science for Sociopaths shows by guest artists and audience. The concept of the show was inspired by a prompt to develop something “outside the box” for performance at the Whangarei Fringe Festival. Fringe festivals provide an opportunity for all that isn’t mainstream to be featured, and that meant allowing myself to conceptualize beyond the typical music performance to which I am accustomed. I wanted to create something that was new, collaborative, and uniquely of this time and place. I wove the song cycle out of various completed and in progress song ideas until a narrative emerged. Then I wrote new songs as needed to complete the story. Taking all that was at my disposal into account – song cycle, venues, potential collaborators – I set out to make something larger than the sum of its parts. Fringe organizers put me in touch with two dancers – Tyler Matheson and Jasmin Fisher-Johnson. Not wanting to create a lot of work for them, I  asked them only to be familiar enough with the music to be comfortable, but unfamiliar enough to be able to improvise.

That was the show, until the Whangarei Art Museum agreed to host. At the time, the gallery in which we performed contained an interactive three panel sculpture, Shared Stories, by Trent Morgan and Kim Groeneveld. It was captioned, “Patterns are all around us. They can be visible or invisible. They are inherent in nature and throughout our constructed world. For centuries and across cultures, pattern has been used as a means of depicting and making sense of the things around us. It is a powerful language used to craft ideas and share stories, enabling us to express complex concepts in simplified and beautiful forms.” This resonated deeply with me as a musician who manipulates patterns through sound for the same ends. I resolved that we would incorporate the sculpture into the performance. It occurred to me that the audience could manipulate the sculpture themselves. I would engage the dancers and the audience with an auditory narrative. In response to my narrative, the dancers would engage the audience and myself with a visual narrative. In response to o mine and the dancers’ narrative, the audience would engage the dancers and I with a tactile and visual narrative through sculpture. What resulted was a performance in which musician, artists, and audience were wholly engaged in the communication and exploration of a narrative. An equal exchange of energy.

The show was well received and I was asked to do another. With the new concept at heart, I set about repeating the process of creating an equal opportunity performance with whom and whatever was available. What you see in this exhibition is artwork from some of the shows that were born of this concept, featuring works created with dancers, painters, and creative technologists. Every show is uniquely improvised, save for the song cycle. The shows performed during the course of this exhibition will be the retiring events of this song cycle, but not the end of the concept.

The first wall is almost, but not entirely, occupied by photographs from this first auspicious show. There are six photographs which cumulatively serve as a time lapse showing the progression of audience input on Shared Stories interspersed with action shots (the choosing of which was THE hardest part of pulling this exhibit together. There were over 200 to pick from!) The far end of the hypotenuse was occupied – or rather, unoccupied – by a promise of ART PENDING (a solid tease and advertisement, yes?). 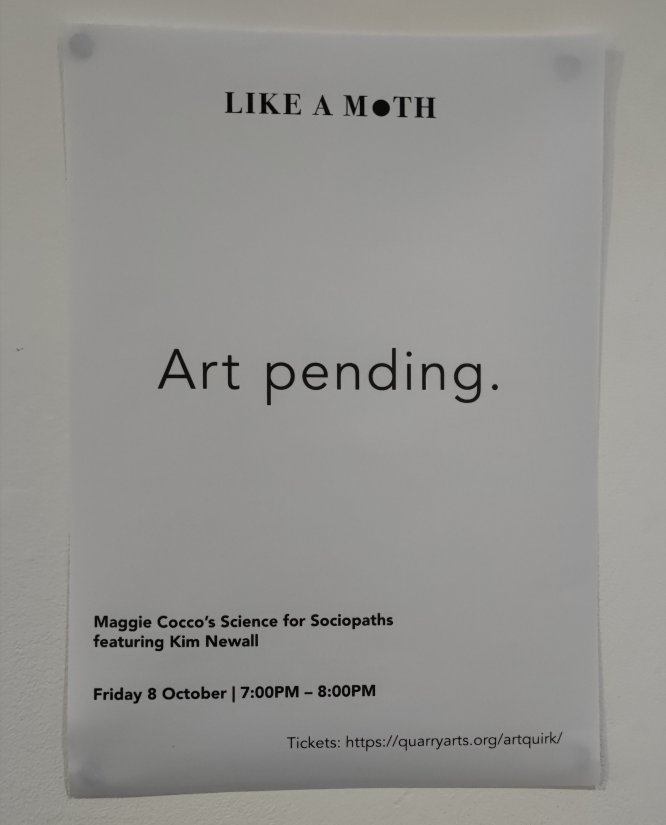 Catch the livestream from the 8th, or tune in later for the edited highlights.

At the far end of the hypotenuse the musician’s tools – keyboard, speakers, mixer, cords, stands – are surrendered in all their glory (and expense!) to the Exhibit, cordoned off by imagined ropes between pillars that flanked the blunted tip. The smallest wall features the second largest piece in the gallery.

…the description of which was photobombed by Karl 😅  Here’s what it says.

Olivia Garelja is a multi-disciplined creative based in Matarau-Whangarei. A muralist, photographer, and team leader by trade, her interests lie in how we see and interpret the world around us, especially the “knowing” revealed in intuitive expression.

For this show featuring Olivia, an 1800 X 1800 canvas was erected in a large warehouse. Six containers of Acrylic paint and brushes were provided, and while Maggie played, Olivia painted. Between each song, the audience was invited to paint, mark, otherwise interact with the canvas as they saw fit.

To the dutiful wanderer’s immediate right hangs the whimsical collection of pieces created at Maggie Cocco’s Science for Sociopaths featuring Kim Newall at ONEONESIX. Forty two distinct pieces stand unique and in combination to tell the narrative of the song cycle as written, as interpreted, as forgotten, as remembered.

Further along the same wall and opposite the entrance, the largest piece (once heaped unceremoniously on the backseat of my car 😬 ) is so vast and interesting in its composition that the less dutiful wanderers are immediately drawn to it. One chooses their favorite part and has to wonder which stroke of body part to thank for it.

The fourth wall is just that; a space set aside for the Exhibition Audience to reflect on and collect their impressions from the onset of the exhibit on October 1st till its conclusion on October 18th.

Thus ends our tour of the first ever Exhibit: Like A Moth by Maggie Cocco’s Science for Sociopaths.

UP NEXT:
Tune in to the LIVESTREAM of Maggie Cocco’s Science for Sociopaths featuring Jasmine Fisher-Johnson from Facebook, Twitch, or YouTube on Friday, October 15th at 7pm NZST.